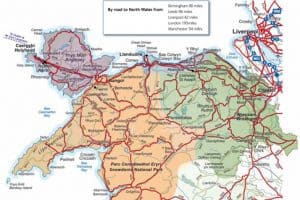 Just an hour from Manchester and less than four from London. So in no time at all you could be settling down for the night at one of our wildest, or highest, or most beautiful locations.

Connected to the motorway network via the M53, M54 or M56, the A55 Expressway makes access to the coast easier and quicker than ever.

Fast rail services link London (Euston) with the coast and serve the University City of Bangor and Holyhead, the gateway to Ireland. Rail services from London Euston and local train enquiries Tel: 0870 608 2 608

This website uses cookies to improve your experience while you navigate through the website. Out of these, the cookies that are categorized as necessary are stored on your browser as they are essential for the working of basic functionalities of the website. We also use third-party cookies that help us analyze and understand how you use this website. These cookies will be stored in your browser only with your consent. You also have the option to opt-out of these cookies. But opting out of some of these cookies may affect your browsing experience.
Necessary Always Enabled
Necessary cookies are absolutely essential for the website to function properly. This category only includes cookies that ensures basic functionalities and security features of the website. These cookies do not store any personal information.
Non-necessary
Any cookies that may not be particularly necessary for the website to function and is used specifically to collect user personal data via analytics, ads, other embedded contents are termed as non-necessary cookies. It is mandatory to procure user consent prior to running these cookies on your website.
SAVE & ACCEPT